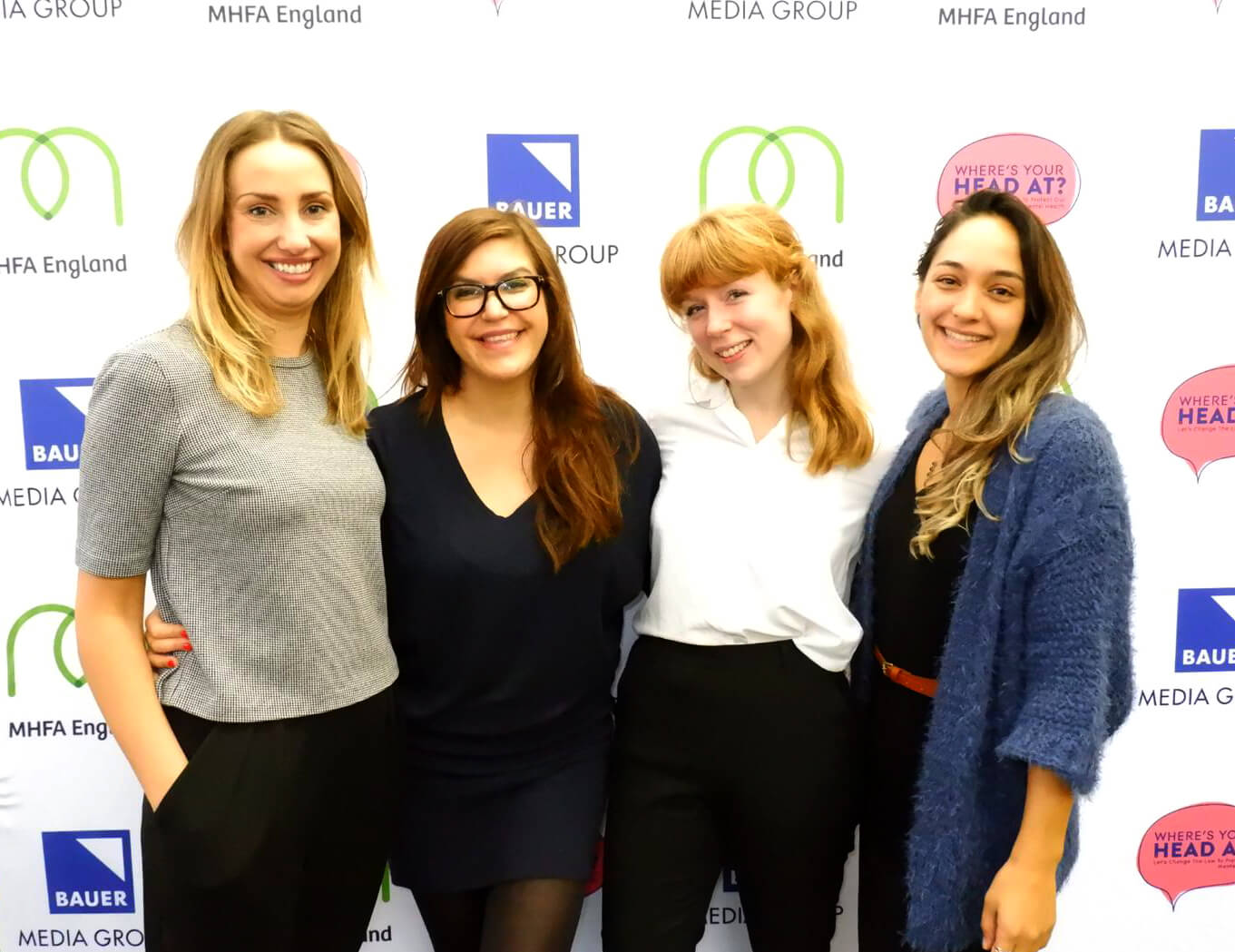 PUSH was delighted to be part of, what we all hope will prove a pivotal day for mental health in the workplace, this week. We were invited to the Houses of Parliament by our client, Bauer Media, to support the Where’s Your Head At campaign. The initiative by the Mental Health First Aid (MHFA) organisation and writer and campaigner, Natasha Devon MBE, aims to change the law to have a mental health first aider in every company.

So far close to 200,000 signatures have been collected and they were delivered directly to No 10. PUSH was asked to join the team when they presented the petition because of the work we do in this space, which is a huge focus for us.

We feel passionately about the importance of having a mental health first aider inside companies for a number of reasons. Not least because, in many instances, the workplace is the cause of the problems or certainly a major contributor to it. So, in which instance, employers actually have a responsibility to fix it. Causes are all too obvious when we go into organisations: unrealistic expectations on staff, constant demands, always-on cultures and no realistic time for breaks.

MP Luciana Berger kicked off the briefing and talked about how she is leading the charge for a debate in the Houses of Parliament and put forward a motion for this change in law. She emphasised the importance of taking action to support “lasting change”.

It was great to see Bauer Media CEO Paul Keenan at the event. As well as talk about how the company has used its massive reach (25 million people a week) to promote the campaign through brands such as Grazia, Heat, KISS and Absolute Radio, he spoke from the point of view of a CEO. “We must see the cost as an investment, helping people stay healthy pays back in increased productivity and engagement,” he said, which will hopefully strike a chord with fellow senior leaders.

Bauer Media carried out a survey that revealed the majority of people’s stress comes from work and financial pressures. It also highlighted that there is an 18-month waiting list for people to get counselling on the NHS, further putting the onus on employers to acknowledge the responsibility they have to look after their people. And why wouldn’t they, since the upshot of having a mental health first aider can mean 30 per cent less sick days?

Simon Blake, OBE, CEO of the MHFA, stressed how mental health needs to be seen on an equal footing with physical health and the organisation’s mission is to have one in 10 people in the UK trained in mental health. He also talked about some of the progress that has already been made with its clients, such as WHSmith, which has committed to having as many MHFAs as they have physical ones.

Indeed, it was WHSmith’s head of strategic projects, Alison Garbott, who gave one of the most powerful and emotionally charged talk. She relayed how when she joined the company as part of the retail staff she was quickly given training on how to lift heavy boxes in the correct way so as not to hurt her back but added: “it wasn’t until the suicide of a friend and colleague before my education on mental health started.”

Her own painful personal experience led her to become a mental health ambassador for the company and, after listening, we were all left in no doubt about the power of one person’s story and actions to make a difference.

And we need more people like Alison to speak out if we are to prevent others from going through similar experiences. It is all very well experts saying what you should do but real-life examples and insights have much more resonance.

Similarly, Natasha Devon, MBE, understands mental health only too well as she lives with a panic disorder. She compares it to having a condition like diabetes: she has to manage it daily, take medication; and be aware of the situations she puts herself into. She said despite taking strides, in over a decade of campaigning in mental health “we still aren’t there yet”. The Bauer survey revealed, for instance, that more than half of people lied to their boss about the reason for sick leave, blaming a physical reason when it was mental. Natasha said “we need structural change” and stressed that “awareness” will only get us so far.

There is no doubt that the time for action is now and we need to plan for it and put the mental health support structure in place at organisations before problems arise for individuals.

PUSH has seen first-hand how the importance of mental health is overlooked. Many people don’t stop and think about how they are feeling, let alone how this is affecting their behaviour. Just talking to someone who understands can have a profound effect.

We are helping to further the campaign by generating awareness but can also offer practical solutions to help companies take solid action and help them play an active part in this much-needed change. We run MHFA training and also run programmes to support companies in putting preventative measures in place for good mental wellbeing.

So, a big well done to Bauer Media, Natasha, the MHFA team and WHSmith and thank-you for letting PUSH be a part of it. But the hard work continues and to any employers reading this, we leave you with one question: what are you doing to get MH first aid in your organisation?

The PUSH team is passionate about empowering companies to create open-minded cultures. Our team is trained Mental Health First Aiders, we mix this grounding with our own bespoke mental health programmes that offer a well-rounded solution, arming your workforce with the tools to embrace mental health and support each other.  Get in touch to find out more.

What Impact Will Digital Transformation Have On Employee Wellness?

Change Is Going To Come, So Prepare Your People For It